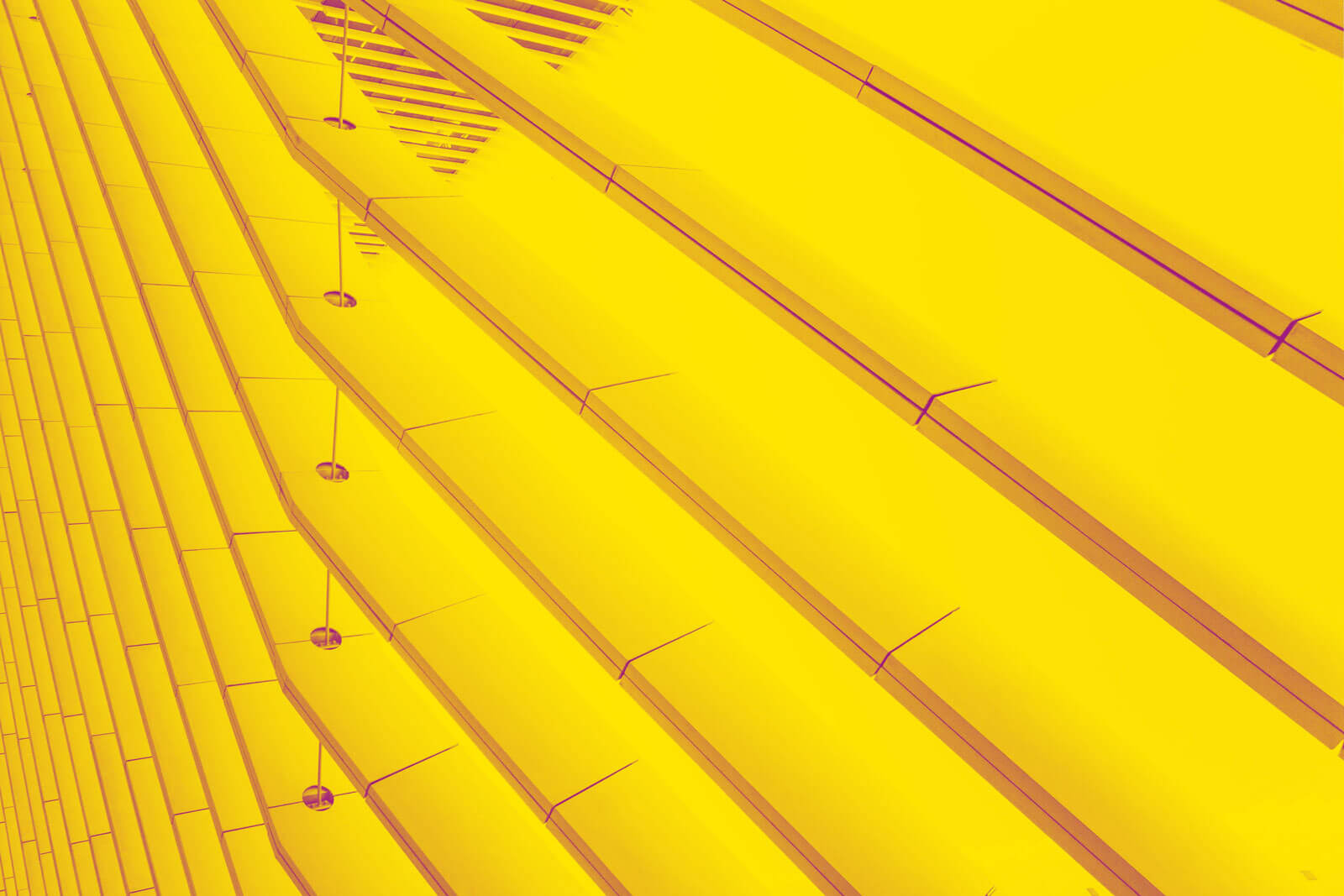 Poking around in the world of NFTs you will primarily come into contact with NFTs on Ethereum Virtual Machine (EVM) based blockchains. Now that Opensea Solana has integrated NFTs on its trading platform or well-known marketplaces such as NBATopshot have been implemented on Flow, it is worth to take a closer look at both of them. Not at least in order to avoid expensive mistakes, caused by bad decisions for a certain technology.

To get a practical understanding of both Blockchains, we have deployed the identical implementation of a rudimentary NFT marketplace including the implementation of the associated NFT smart contracts on each of them. The experiences and lessons learned are shared with you in this blog series.

In this part, you will learn how Flow supports the low-threshold entry into blockchain development.

Flow is a Proof-of-Stake blockchain designed to be the foundation of decentralized, blockchain based games, apps, and digital assets. It was developed by Dapper Labs as an alternative to Ethereum due to the network congestion caused by their NFT platform CryptoKitties. To improve network performance, Flow separates the jobs of a validator node into the four roles Collection, Consensus, Execution and Verification.

Cadence is Flows own high-level resource-oriented programming language allowing for a new form of ownership defined by three rules: Each resource exists in exactly one place at any given time. Ownership of a resource is defined by where it is stored and the access to methods on a resource is limited to the owner.

Interactions with a Smart Contract are separated into State Queries (Scripts) and Transactions. A script cannot perform any writes to the blockchain and can only read the current state of the blockchain without requiring permission from any account. 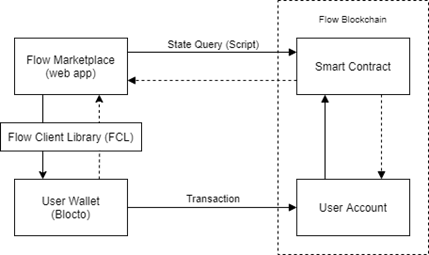 Transactions are code submitted to the blockchain that mutates the state of user accounts and smart contracts signed by one or more accounts. Transactions are split into the phases prepare, pre, execute and post to improve readability and safety.

Objects are stored under paths in an account's storage. Paths consist of a domain and an identifier: /domain/identifier. The three valid domains are storage, private, and public. The path associated with a smart contract uses the identifier defined within the contract to store objects on the account. The objects are stored in the storage in their capabilities in the public and private domain. 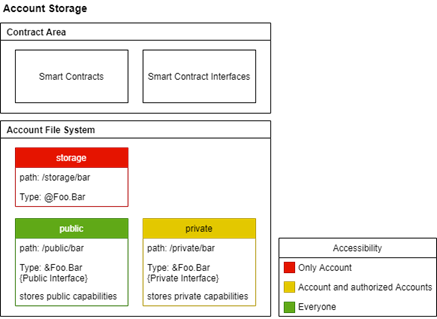 Once a capability is created and obtained, it can be borrowed to get a reference to the stored object.

Transactions in Flow are signed by different roles, which can involve one or more accounts. 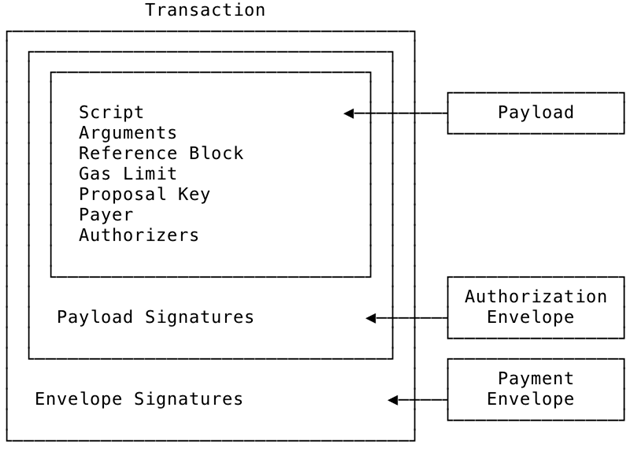 A transaction can declare all signer roles to be only one account. An example for this would be minting an NFT on our Marketplace, which is currently only signed by the admin account who has deployed the contracts. Destroying or sending an NFT, instead requires the owner as the authorizer and currently uses the custodial wallet provider as the payer and proposer on the testnet.

Flow supports Wallets to be managed in two ways: custodial or non-custodial mode.
Non-custodial wallets require the owner to know and store their wallet information themselves, whereas custodial wallets depend on external wallet providers such as Blocto or Ledger. Blocto, for example, manages your keys for you and merely requires a registration via email. The following summarizes the key differences between both modes:

As alluded to in previous sections, contracts can be deployed in two ways:
Either via transactions, where access to the signer's account object allows mutation of its contracts or via the Flow CLI. The latter requires a configuration in a flow.json file, which in turn requires full knowledge over the wallets.

Due to the fact that deployed contracts are saved in the storage of a user it's not possible to deploy the same contract multiple times with the same account. Therefore it's necessary to delete an old contract before redeploying it. This may seem easier than it actually is on Flow. Currently it is required to contact the Flow support team in order to deploy and delete contracts on the mainnet. As such it is recommended to thoroughly test a contract on the testnet before deciding to deploy it on the mainnet. Whereas on the testnet it is a bit easier. Deployment can be directly executed without the need of contacting someone. Deletion may still cause problems depending on the way the account is handled. If it is a custodial account like Blocto it may not be possible to delete an existing account because the deletion request might be regarded as malicious and therefore gets rejected. The only solution would be to create a new account. A non-custodial account does not face this problem as every request gets directly signed with this account without interference of another party. As such updating a contract on the testnet may only be possible with a non-custodial account.

In addition to the restrictions stated above there is one additional requirement for updating an existing contract. The new version of the contract must support the existing saved data and should therefore not differ too much from the previous version.

The prototype supports a dashboard, which shows all NFTs that have been minted and their respective owners. 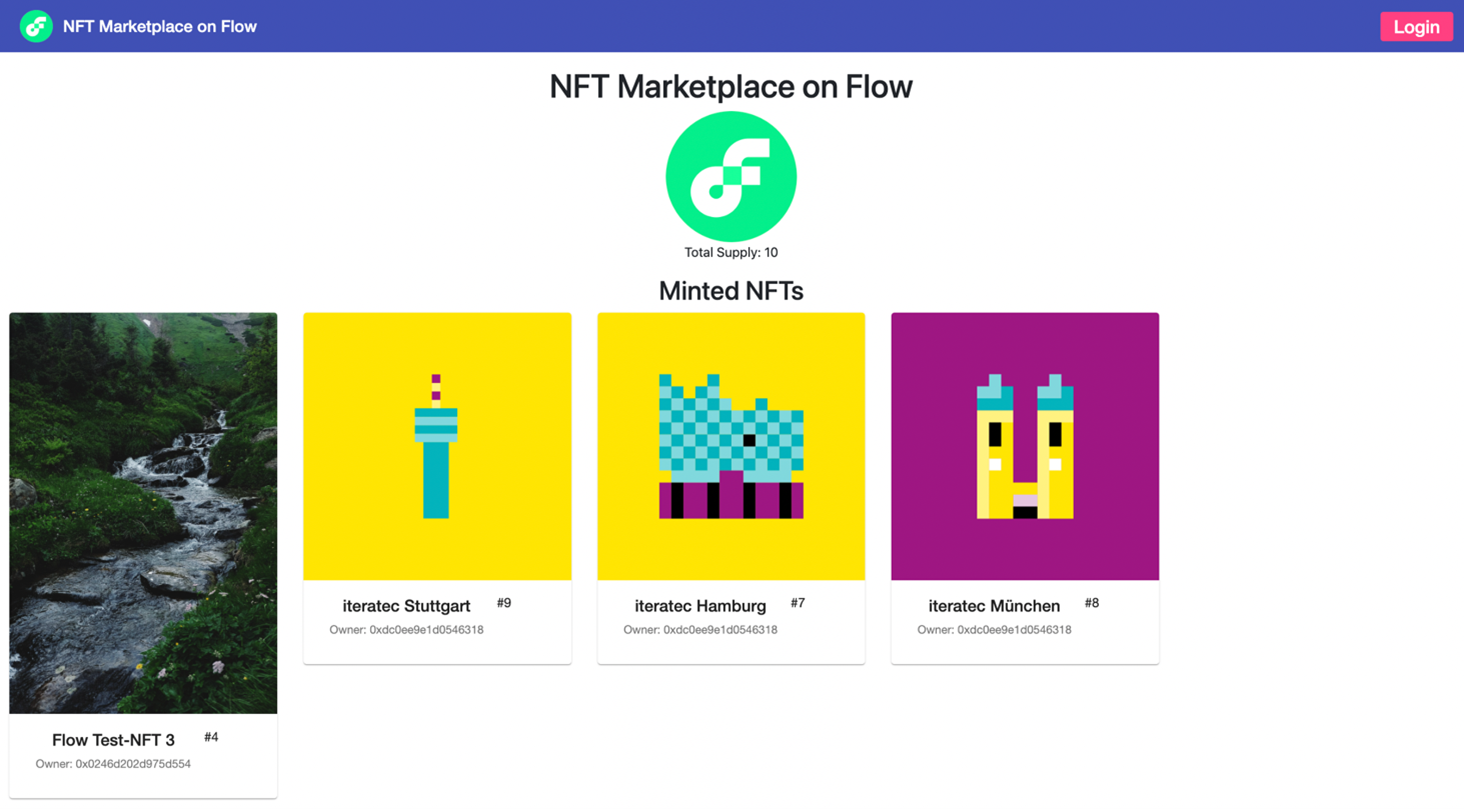 After authentication with a wallet provider, the dashboard only shows the user's private page This page lists all NFTs in the user's collection, and they can be opened in a detailed view, which allows the user to transfer and delete the NFT. 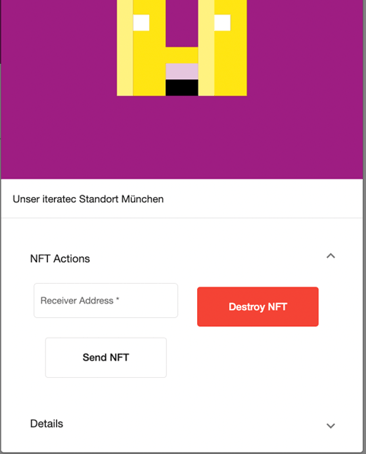 The minting of new NFTs with the admin's immediate authorization is supported as well.

The project uses Flow's FCL JS package (Flow Client Language for JavaScript) for interactions with the blockchain, since this application features an Angular frontend. A few extra setup steps were necessary for it to be usable in an Angular environment, however, because the package requires both access to the window component of a frontend and several Node.js backend dependencies (official FCL JS examples feature a React & Next.js environment).

FCL JS' main use cases are the configuration of blockchain & wallet provider end points, the dispatching of transactions and queries and the management of (custodial) user authentication and authorizations.

We have compiled the most important findings and experiences from our example implementation in the following two tables. We have contrasted these with the more developed and widespread Ethereum world. It should be noted that these are experiences from the first half of 2022.